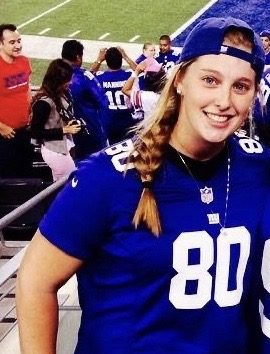 Courtney grew up on Long Island. In college she was a four year starting goalie at Farmingdale State. Courtney was named 2009 Skyline Conference Rookie of the Year, ECAC Division III All-Metro/South Region Rookie of the Year, and IWLCA All-Region Second Team. Selected to the 2009 Womenslacrosse.com Division III All-Rookie Team.  Also named the Skyline Tournament MVP, after finishing the playoffs with an average of 22.5 saves in two games. Senior year Courtney was Skyline Conference Player of the Year, Tournament MVP and a Second Team ECAC Division III Mid-Atlantic All-Star. Finished her career with a .565 save percentage, ranking 4th in the Nation among Division III goalies.  Following college, she was the assistant coach at Farmingdale State for three years.

Get to know Courtney!

That’s a tough one, it’s a toss up between a month in Costa Rica or a month in Hawaii. Having to choose …. Hawaii it is! I’m completely obsessed with sharks, and being able to swim with them in their home was absolutely amazing! Not to mention the islands are breathtaking. Not only did I spend as much time as I could in the water, I went hiking and kayaking to waterfalls as well as took a helicopter tour through the volcanos and along the Napali Coast.

It’s a big family, a home away from home. 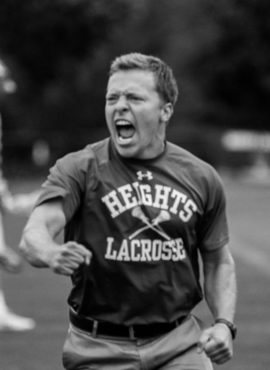 While in high school, Coach Dave was class president, a three-sport athlete, and a two-time captain for the varsity lacrosse team.  He went on to attend Loyola University, where he was offered and accepted the position of JV Head Coach for The Friends School in Baltimore.
After graduating Loyola University magna cum laude, Dave went back to his alma mater, The Heights School, to serve as 6th grade homeroom teacher and to pursue his love of coaching.  Dave became the Head Varsity Coach for the Cavaliers in 2010, and his now entering his 10th season as the leader of the program.  During that time the team has earned a 101-66 record, including two Metro Independent Lacrosse League Championships.  Dave was awarded US Lacrosse “Coach of the Year” in 2011, 2013, 2017, and 2018.
After four years as a homeroom teacher, Coach Dave turned to the club lacrosse world to pursue coaching full time.  He became General Manager of Next Level Lacrosse in 2014, and then President in 2016.  Since that time, Next Level has experienced significant growth in all areas, and is now recognized as one of the most competitive club programs in the country.

Get to know Dave!

When I was a junior in college I lived in Australia for 5 months with 3 of my best friends.  They called it “study abroad” but I don’t remember studying all that much.  A few months in we took a vacation to the South Island of New Zealand.  We spent 10 days driving up and down the coast in a big camper van.  I went sky diving and hang gliding and didn’t have a care in the world.

2.You are headed into isolation for one month and can bring three items. What do you bring?

An industrial size box of matches, a piano, and a picture of my beautiful wife, Emily!

Coaching, mentoring, and teaching young men, especially during an intense game against the best lacrosse competition on the planet. Coach Boh Mitchell is the Boys Program General Manager and Co-Owner of Next Level Lacrosse.  Boh was a two-sport varsity athlete at The Heights School where he played varsity lacrosse all four years and was captain his senior year.  He was also awarded the Headmaster Award as a senior, the lacrosse Cavalier Award his senior year, and the golf Cavalier Award his junior year.

After college, Boh pursued a career in medicine.  While completing the medical school prerequisites in a post-baccalaureate program at the University of Maryland, College Park, he worked in a research lab at Johns Hopkins University where he studied brain development and various mental disorders, specifically schizophrenia and PTSD.  During this time he was also a part-time academic tutor and helped his brother, Dave, as an assistant coach for the Varsity team at The Heights School.

Boh finally decided to pursue coaching with Dave.  He accepted his brother’s offer to help take over and run Next Level Lacrosse and joined the coaching staff full time as the defensive coordinator and Associate Head Coach at The Heights.  He is now in his sixth year at Next Level and seventh year at The Heights where he was awarded the 2015 US Lacrosse “Assistant Coach of the Year.”

Get to know Boh!

I’ve been on some great ones, but one of my favorites was in the spring of 2015 when my wife and I spent a week out west in California.  I had been to Rome 4 times in my life, but had never been west of Ohio.  We spent a day in Carmel, three days in San Francisco, and two days in Napa Valley.  It was a particularly special trip for us just one year into our marriage.  I became a fan immediately of the Pacific and the people living there.  From the seven-mile drive along the coast, to the Golden Gate Bridge, to the wine tasting, we had an absolute blast in an a part of the country that seemed so different from where I had lived my whole life: DC.  I’ll always be a fan of the trips I’ve taken to Madrid, Prague, Florence, etc. but to finally go out and see a city as awesome as San Francisco and enjoy all the things these areas had to offer made this vacation particularly memorable.

A Kindle, an iPod, and a speaker.

My favorite thing about NL is the coaching staff I get to work with.  Our boys program has a fantastic lineup of guys who love to coach the game but, more importantly, love hanging out with the players and with each other.  Some of our players spend hours per week with Next Level coaches, so it’s important for us to have the right types of men who the players can get to know and enjoy being around.  It’s a blast coaching with them and it makes being at work that much more enjoyable.

Coach Colin Heeter is the Director of Camps, Leagues & Tournaments for Next Level Lacrosse.  While in high school, Coach Colin was a four year member of the varsity lacrosse team at The Heights School.  He then went on to receive his bachelor’s degree in Sports, Entertainment & Event Management from Johnson & Wales University.

In 2008, Coach Colin was hired as a volunteer assistant lacrosse coach at Brown University primarily working with goalies and the offense. While in Providence, R.I., he helped the Bears make it back to the NCAA Tournament (after a 15 year hiatus), make it to the first ever Ivy League Tournament and won a share of the regular season Ivy League Title.

In 2010, Colin moved back to the DMV and accepted the position of Assistant Athletic Director and JV Head Coach for Bishop O’Connell High School in Arlington, VA.  After three years as the JV Head, he was promoted to Varsity Associate Head Coach and Offensive Coordinator.  After serving the O’Connell community for seven years he decided it was time for a change and accepted the Associate Head Coach position at St. Albans School.  With the Bulldogs, Colin runs the offense and game-day substitution box, he also is the Head Coach for the 8th grade team.

Get to know Colin!

Prague, Czech Republic and London, England (summer of 2016). I was hired by a local company to organize, recruit and coach a high school level lacrosse team that traveled to Prague and London to compete in two international lacrosse tournaments; the Prague Cup and the London Open. We came in third place in the Prague Cup and won the London Open by beating the Wales National team by a score of 13-11. We competed in these tournaments as Team USA, which was a tremendous honor and something that will last with me and my players for the rest of our life! The company (MVP International) did a phenomenal job keeping us busy while we were not playing lacrosse. In Prague we visited the Petrin Lookout Tower, had a 2-hour Segway tour of the city, took photos in front of the Lennon Wall, toured the Prague Castle, and had a four course meal cruising down the Vltava River. In London, we saw the “Eye”, Big Ben, toured King Henry VIII’s Castle, saw the changing of the guard at Buckingham Palace…and of course had a traditional fish and chips dinner! 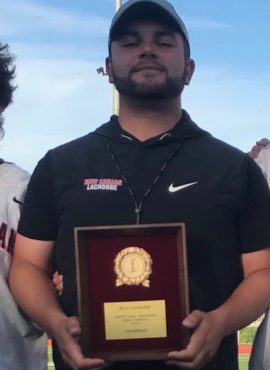